I've written this little essay for Dominik Wujastyk's brilliant lecture "Historical Introduction to Yoga philosophy and Early Indian Traditions of Meditation" and I've got to say it helped me quite a lot to find a stance towards Indian thought. As - I think - many do nowadays, I've always felt quite attracted to "Indian" thought (I am aware of how broad a term that is), sometimes even felt rather intimidated by the more radical concepts of Nirvana and so forth. But I think I have found something, where I do defer from what Indian thought aims for and I've tried to express this in this little essay...very short summary: that our modern societies might be able to think even closer to immanence than the ancient Indian.
This could fill books. See it as a starting point. I'll for sure come back to that. 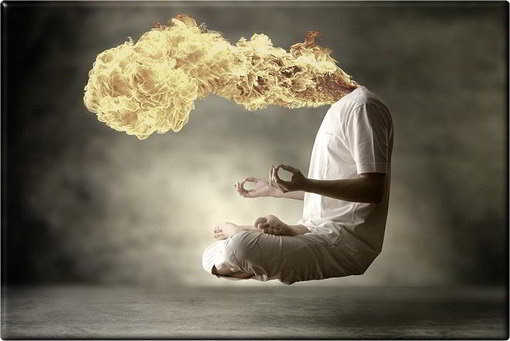 Photo via http://skytechgeek.com/2011/11/2940/yoga-2/ and of course not mine.
are the property of their respective Creators. We do not claim the work featured here as being our own in any way. - See more at: http://skytechgeek.com/2011/11/photomanipulation-art-transcending-the-frontiers-of-the-imagination/#sthash.zuuJk2bR.dpuf
Eingestellt von Kilian Jörg um 05:14 Keine Kommentare:

This is a little essay I wrote about Mescaline - or drugs in general - for the wonderful lecture of Dominik Wujastyk about Yoga Philosophy. It is way to short to put forth the original argumentation I had in mind and as a result it is more a giving you my opinion than arguing for it (a very very blurry line seperates those two). However - I like my opinion expressed in it, would like to hear other opinions and hope to find the time & motivation to rewrite the whole thing in more appropriate detail.
________________________________________________
Aldous Huxley, R.C. Zaehner and Gilles Deleuze tripping
Mescaline is a psychedelic alkaloid that naturally occurs in the Peyote cactus that is native in Texas and Mexico. The indigenous people of those regions have used the hallucinogenic, visionary effects of the drug for millennia in religious contexts.
Western scientific interest in the drug and its visionary potential started in the late 19th century and had its climax in the 50ies and 60ies of the last, until it subsequently got illegalized around the 1970ies in almost all Western nations. Together with LSD, the effects of Mescaline attracted many people in the 50ies and 60ies and frequently was subject to artistic as well as scientific research by notables as different as Aldous Huxley, Ken Kesey, Carlos Castaneda, Allen Ginsburg, Antonin Artaud, Henrix Michaux and Ernst Jünger.
In this short essay I will compare the experiences of two early experimenters with synthesized Mescaline - those of Aldous Huxley and those of Robert Charles Zaehner. Both experiments have taken place in "serious" universities and have been carried through and observed by reputable scientists.