Philosophy Unbound has been invited to do a performance at Philosophy on Stage #4 and after some brainstorming we decided to investigate into the links between Nietzsche's will-affirming, Übermensch-creating thought and today's Fitness Studio-culture. In corporal experimentation, Nietzsche's texts and - especially - Sloterdijk's interpretation of them we found plenty of parallels which we forged into a performance, that can be seen tomorrow and Saturday - 27th and 28th of November at 23h at the Studios of Tanzquartier Vienna. The PoS#4-Festival is officially sold-out, but we have been told, that you still might be able to access our performance, given that it is rather late and some festival-ticket-holders might already go to sleep after a long day. We hope to see you there and here's a little teaser, of what will be awaiting you.

// For some weird reason my commentary on the Viennese election from 12th of October just disappeared. Luckily I was able to retrieve it in the webchache. So here is the original post: What is ISIS / Daesh?

This post is not about giving an answer to this question - the habit of succumbing to answers too fast is one of our main problems and only results in constantly aggravating the situation even more.

I find it remarkable that I haven't yet seen one attempt of an in-depth analysis of the phenomenom of Daesh. Philosophers, Thinkers of today seem to ignore it - why don't Chantal Mouffe, Peter Sloterdijk, Judith Butler or Slavoj Zizek dare to speculate on the issue of these raving madmen? It seems to me like we all content ourselves with labeling Daesh as pure fanatic irrationalism and consider them not worth of further inquiry - "they are pure mad(wo)men, there is nothing to understand in their actions, nothing to analyse" seems to be the consensus.

Fair enough, but is this really all we can do? Do we really want to leave the interpretation of those terrorist attacks to populists and daily newspapers, who keep repeating the same old prayers, that will insure the situation to remain as stuck as it is.

Daesh seems irrational and pure evil. In fact, I can not help but being fascinated by them: they seem to be the incorporation of stereotypical Arabs from Hollywood action movies from the 70ies: they are pure evil, they have no morality worth considering and even their religiosity is pure blasphemy, according to almost every muslim cleric on the globe. They might be the becoming-reality of those dark-skinned, uranium selling, world enslavement craving monsters James Bond, Rambo or whoever shot down in huge numbers.
I think it is almost established as an consensus in the more intelligent debates that Daesh is much more a product of Western culture, its ongoing imperialism, its media (from film to ego-shooter computergames) and maybe even ideals, than of Islam. (I wholeheartetly recommend Mahi Binebine's breathtaking novel Les étoiles de Sidi-Moumen as an excellent demonstration that "the problem with Islam" is actually and much deeper down a problem of social inequality.)

Speaking of social inequality: this is the other idea I want to propose for an interpretation of Daesh: maybe it would help, if we understand these blind and insane bombings as a late and desperate expression of class struggle.
Class struggles' original ideology in the last two centuries was mainly communism in various interpretations. However, with the so called post-modernism the communist ideas proved themselves less and less adequate and were slowly deconstructed. Neoliberal capitalism seemed too overwhelming and managed (also with a lot of massive political, military, propagandic intervention) to obliterate communism as an ideology of hope and struggle for the underpriviledged classes. The promises of consumerism and popular participation of capitalisms' advantages persuaded the most. Those who still clung to those dying ideals of communism got more and more violent (RAF) and thereby helped to dismantle the ideas and make them ever more unattractive. Finally - and what is the most important for this analysis - the lower, exploited classes were outsourced into so called Third World countries.
By this development, these classes were completely bereft of all means for any intelligable class struggle: neither were their exploiters anywhere near and in any way attainable, nor did they posses any ideology which could at least enable them to think their misery. One could say neoliberalism formed perfect slaves: not even capable of understanding their predicament.

I think we should give it a try to think Daesh and the likes as desperate expressions of class struggle - or what's left of it. A class struggle which is neither heard, nor even understood by its actors, which only believe in celestial bliss after the noble martyr's death or whatever other nonesense. The bombers of Beirut, Mumbai, New York, London, Lagos, Tunis or Paris are the sad succesors of an ancient tradition of class struggle which was once, before its expiration, called communism.

These are a couple of ideas on the phenomenon on Islamic terror which I would like to put out for discussion. As intelectuals, let's try to go deeper into the matter then the news and politics. Let's try to first ask and understand the question "What is Daesh / ISIS?", rather than rushing into conclusions which might be dangerous.

//PS: After posting this I was referred to several good articles, which I will list here:

This is going pretty fast: I am happy to announce that - after not more than a year of existence - Philosophy Unbound is already going into its 6th Edition! This time - under the motto "Modern Talking" we will be discussing, performing and reflecting on our relation ship to language - in its broadest sense.
Philosophy Unbound #6 "Modern Talking" will again take place at Spektakel (Hamburger Straße 18, 1040 Vienna) and this time the Afterparty will be at Roxy (Faulmanngasse 2, 1040 Vienna) where I will be DJing :) 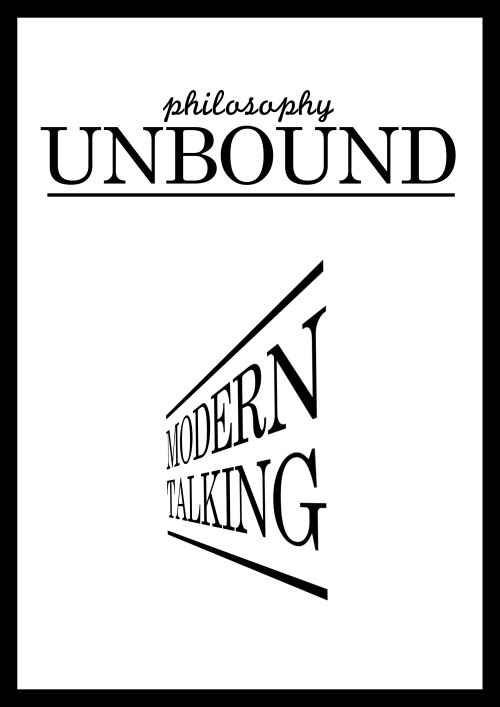 Entry: Free Donation (suggested donation 5 Euro, we are a no budget organisation, everything will go to the performers)